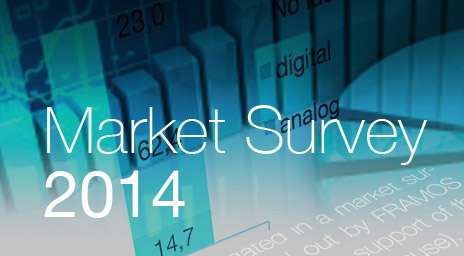 Industrial cameras, their market and their technical features

What is the status quo of the imaging market, and how will it develop in future? For the 7th year in a row, international image processing specialist FRAMOS has conducted a survey of manufacturers and users of industrial cameras in collaboration with “Inspect” trade magazine. This study provides enlightening insights into future technical development and market requirements from the point of view of manufacturers and users.

The study is based on answers from 54 respondents based in 13 countries, 10 manufacturers and 44 users, with the main focus on German-speaking countries and Europe. Respondents were ranked in terms of relevance, based on the production or purchase volumes on which they were surveyed. 40% of the manufacturers produce up to 500 cameras a year, 20% over 10,000 cameras. Principal sales areas are North America and Asia. 80% of users purchase fewer than 100 cameras a year, only 5% require more than 1000 cameras. The main area of use is Europe, at 75%, due to the focus of this survey. The manufacturers’ sales markets are production automation, medical technology and measuring technology, each at nearly 20%, and logistics, quality assurance and traffic monitoring, each at approx. 12%. Of the users participating in the survey, 30% cite quality assurance as the most important use, followed by production automation and measuring technology, each with 26%. Medical technology, on the other hand, had a less significant role, at 5%.

Recognition and frequency of use of the biggest camera brands

Willingness to invest is an important indicator of market growth. In this respect, manufacturers and users are of the same opinion and see a clear push for image processing: 57% will be using new imaging systems in the near future, and 43% believe that old systems should be replaced. Not a single participant chose the option “Nothing further required”. In addition to this evident willingness to invest, price trends are another important factor. Here, the manufacturers are primarily focusing on low-price cameras, and would like 60% of their production portfolio to be priced between 150 and 350 euros. Categories up to 650 euros, 1000 euros and 3000 euros should each make up 10% of the portfolio. Cameras for less than 150 euros and over 3000 euros are not seen as relevant from manufacturers’ point of view. The users have the same opinion as regards the cheapest cameras. They tend to be willing to spend more money on good quality cameras, and the preferred price range, for 38% of respondents, is between 350 and 650 euros. This is followed by cameras up to 350 euros, 650-1000 euros and up to 3000 euros, at 19%, 18% and 16% respectively. However, 6% of users are also willing to invest over 3000 euros in a camera. In keeping with these responses, only 8% of users answered the question “What has to happen for image processing to help your business grow?” with “Cheaper cameras”. We can therefore see a clear rethink in terms of functional performance features and compared with the study of 2013, where twice as many users still favoured reduced prices. This year, users consider ease of use and uncomplicated integration far more important. This is also reflected in the view of the market for Smart cameras, for which manufacturers and users unanimously estimate an increased share in the imaging market of 35%.

In respect of sensor brands and their future use in imaging systems, camera manufacturers and users are agreed on their decline or rise. Sensors from Sony may have less usage in percentage, but continue to be the most trusted brand, with a predicted market share of 35% in 2016. In particular, considerable growth is expected for the brands Aptina and Truesense Imaging (both now under one roof, belonging to OnSemi), to a market share of 13% and 19% respectively.

For the CCD and CMOS sensor technologies, due to technical developments manufacturers and users anticipate a complete reversal of fortune over the next 2 years. At approx. 80%, CCD still predominates today, but will fall to approx. 20%, while CMOS will make gains in inverse proportion. This trend was already predicted in studies several years ago, but it remains to be seen whether CMOS sensors can live up to this prediction in terms of quality and number of variants.

Use of CCD and CMOS sensors – today and in 2 years

The upsurge in global shutter technology for image sensors is also extremely important – logically enough, considering that most analysed objects in industrial imaging are moving. 93% of manufacturers and 75% of users find these indispensable. Colour photography by sensors is less relevant, on the other hand. Here, respondents’ prediction is that 70% of manufacturers and 75% of users will continue working with monochrome sensors. Sensor resolution between 1 and 5 megapixels is most relevant to manufacturers and users, at 70% and 57% respectively. The biggest rise within the next 2 years can be expected for resolutions above 5 megapixels, whose share is to rise from 5% today to 10% among manufacturers and 13% among users. Where frame rates are concerned, camera manufacturers are extremely optimistic: the proportion of sensors with over 100fps is to reach 50% in 2016. Users, on the other hand, expect major growth for frame rates between 60 and 100fps, and are otherwise undecided. In the opinion of all respondents, the market share for sensors with less than 25fps will drop considerably, to 10% according to manufacturers and 20% according to users. With this growth in popular resolutions and frame rates, the demand for powerful interfaces also becomes more pertinent. Contrary to the forecasts of 2013, GigE remains the most used interface standard among respondents, at 30% and 56%. While manufacturers still rely to a relatively large extent on CameraLink (28%) and Ethernet (20%) – albeit with falling figures – for users only IEEEE1394a, at 11%, and CameraLink, at 20%, are worthy of mention today. For 2016, both groups of players in the imaging market expect significant growth, above all, for USB 3.0, with a rise to 10% according to manufacturers and 15% according to users. GigE will remain strong in 2016, with manufacturers putting the figure as high as 35% – higher than today – while users’ interest in the established GigE standard remains high, with a forecast of 53%. For data volumes in excess of 8Gbit/s, 100% of manufacturers and 83% of users cite the 10GigE interface already extremely popular from modern IT applications.

Use of different types of interface – today and in 2 years

One of the most interesting and illuminating questions each year concerns how image processing must further develop in order to bring about significant business growth for manufacturers and users. In recent years, there were mostly loud calls for lower prices. In 2014, this has changed. Although 10% of all respondents would still like falling prices for sensors and cameras, the majority of manufacturers and users wish, above all, for simple use of hardware and software and better features for uncomplicated integration. In addition, all players desire technical improvements, such as the further refinement of sensor, CMOS and shutter technology, and interface advances in terms of speed and standardisation.  The conclusion of the 2014 Market Survey can best be summed up by the phrase “Image processing for all”. Both manufacturers and users would prefer cheap(er), simple to use systems, which can be integrated in existing applications and new areas of business at the high technical standard that exists today. The calls of “higher, faster, cheaper” (resolution, frame rates and interfaces, prices) have grown quieter. The industry wishes to further increase the benefits of image processing to the greatest possible extent, and to use them profitably in new and existing fields.

Sony® Launches the IMX487 with the UV (ultraviolet) wavelength

FRAMOS Showcases ToF, SWIR, and GMSL2 Among Other Leading Edge Technologies and Live Demos at the Vision Show 2021