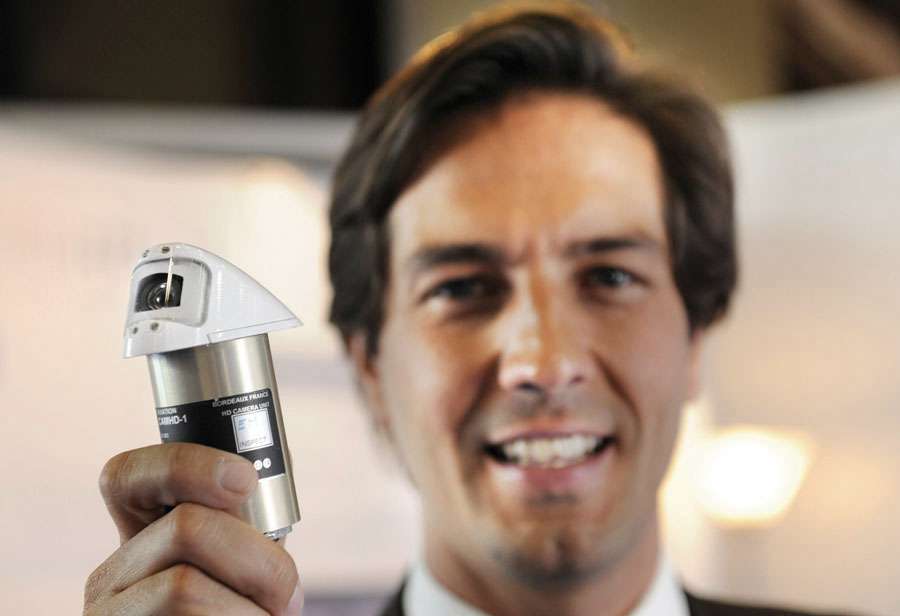 With camera components from FRAMOS, the French camera specialist Otonomy Aviation provides through the use of external HD cameras a better view and more safety in air traffic.

Challenge: In order to offer passengers a broad vista of the landscape, virtually as the pilot sees it, high resolution videos of external cameras are transmitted to the monitors inside. The camera system, developed by Otonomy must meet strict regulations and adverse external conditions in the aviation industry.

The Result: Extremely robust individual components were used for the camera system to keep the harsh environmental conditions and the strict regulations.

The French start-up Otonomy Aviation provides a better view and greater safety using the technology pioneer’s externally mounted high-definition camera currently used in business jets.They enable passengers to look at detailed shots of the landscape in HD that are taken by an external camera and shown on screens in the aircraft with mobile devices soon to follow. At the heart of the camera are a number of components from the German image processing expert FRAMOS. FRAMOS contributes to achieving HD quality and meeting the strict aviation regulations concerning hardware on-board aircraft with rugged and highly reliable products as the camera system developed by Otonomy must also withstand extreme temperatures.

Otonomy, the camera specialist, based in Bordeaux, France, with approximately 15 people working for this company. Otonomy Aviation occupies a real market niche: the customer list reads like a “who’s who” of aircraft manufacturers: Airbus, Gulfstream, Dassault, and soon to be joining Boeing. While competitors do exist, they operate mainly in the SD area. With a camera module that includes components from FRAMOS, Otonomy is the sole provider of HD video solutions on-board aircraft.

Guillaume Daudon founded the company in 2007 and developed the first prototype of his surveillance camera. The fundraising took place in 2009, followed by three years of technical development. The product has been on the market since 2012, with additional funding for the further expansion of the start-up now set to come from venture capital company Oseo. In 2014, Otonomy forecasts annual turnover of two million dollars. The target group was previously comprised of only the owners of private or corporate business jets, but this is all about to change with the product’s industrialisation in the next phase of expansion.  In the future, travellers on commercial flights could also get to enjoy the new technology. “Everything is going mobile.That’s why the camera images should not be shown only on wired and wireless displays in the aircraft, but also on other mobile devices such as the iPad,” says Daudon. The airplane windows permit only a very limited view, and what could be more entertaining on a flight than to have a broader vista of the landscape, virtually as the pilot sees it?

Strict regulations and adverse external conditions in the aviation industry

Due to the plethora of regulations in the aviation industry, the concept is anything but simple to implement. One example is the strict EMI requirements (Electromagnetic Interference) on the use of radio frequencies in aircraft. Other particular challenges faced by the developer were the external camera and its individual components. Extreme temperature fluctuations between plus and minus 50 degrees Celsius require the equipment to be suitably rugged. With the assistance of image processing specialist FRAMOS, components were selected that can withstand the tough environmental conditions and strict regulations. Three important components that FRAMOS offer the experts at Otonomy are a 5-megapixel sensor and the Sunex lenses DSL949 and DSL213, which together produce images in HD quality. “Particularly important points for us were the quality of the lenses and the versatility of the product,” notes Daudon. The company from Bordeaux achieves both of these: “The sensor is noted for its high resolution, HD ability and excellent reliability.With Low Light and Low Dark Current features, it is especially designed for applications in difficult lighting conditions and reduces image noise through automatic black level calibration,” explains Emmanuel Maridor, Managing Director FRAMOS France.  A Sunex lens also selected by FRAMOS has been purchased by customers such as Airbus Defence and Space for a flight into space in December 2014 as part of the “Fruit Fly Lab” of NASA’s Ames Research Center, where temperatures can reach as low as minus 272 degrees Celsius. In the case of Otonomy, “a clear image should also be supplied despite adverse external and weather conditions, regardless of rain, fog and ice”, explains the company’s founder.

However, entertainment isn’t the only thing the camera system is capable of producing. The solution has already been used on the ground to increase security during boarding and de-boarding, and to visualise the raising and lowering of the undercarriage. In the future, however, Otonomy wants to focus more in the area of security. This will come with new requirements, such as a higher camera resolution and an extended wavelength range for night vision. Additionally, the captured images will have to be saved in order to provide information in the event of a security related concern.

Regulations mean it is not possible to use prefabricated cameras as even the development process has to be documented in an exceedingly specific way in the aviation industry. The same applies for the documentation of the interface between the camera and computer. That is why the French company, which is certified to EN 9100 and European standards EASA 21g and 145, has developed its very own camera solution with FRAMOS components including a PC. In terms of hardware, the solution also had to meet standard DO-160 (Environmental Conditions and Test Procedures for Airborne Equipment) of RTCA in order to obtain approval.

For technology pioneer Guillaume Daudon, the decision to go with FRAMOS was based on the high quality standard as well as the fact that he had the support of a reliable partner with simple order processes and a high degree of product availability. The head of Otonomy appreciates the straightforward collaboration:

“The advantage is that we can use off-the-shelf components that did not have to be specially developed for us.Initial results show that customers are very happy with the image quality achieved and that communication between the lens and Ethernet output signal functions excellently”, summarises Guillaume Daudon.