M-OLED Technology and OLED Microdisplays: What are the Benefits for Imaging Applications?

Home
Articles
M-OLED Technology and OLED Microdisplays: What are the Benefits for Imaging Applications?

OLEDs are cutting-edge technology for video displays. These displays are paper thin, exhibit high brightness, operate at lower power, and are made from a solid Si-wafer substrate. How does this technology work, what are the advantages and which applications benefit?

There are mainly two ways in nature to create light: First, chemical luminescence is the emission of light as the result of a chemical reaction. For example, a fire-fly with a light sensitive compound and a catalyst (luciferin and the enzyme, luciferase, respectively) emits light based on chemiluminescence. Secondly, through electroluminescence, an electric potential through a medium is converted into a light emission. In electronic display technologies, LCDs using backlit liquid crystals were leading the way in the past years. In contrast, organic LEDs emit light directly in response to an electric current. The self-luminous OLEDs show numerous advantages and gain market share thanks to high speed and brilliant colors.

What are the Differences Compared to LCD Technology?

In comparison to LCDs, the light-emitting diodes in OLED emit light based on organic chemicals. LCD displays are made from liquid crystals, and must be illuminated from the back of the panel (back-lit). Conversely, OLED displays are self-emitting and do not require back-lighting, so that less power consumption is realized. The dark areas in an LCD display are backlit also, and depending on the position of the LCD liquid crystal molecules, the pixel is either illuminated, or they are not illuminated. With LCD technology light bleeds occur and decrease the video contrast. Alternately, in the “self-emitting” OLEDs, each pixel illuminates individually and for this reason, only those pixels that are illuminated, appear on the display. Based on these basic differences, OLEDs depict higher contrasts; have faster slew rates; and, have a larger color gamut.
The LCD liquid crystal displays must be embedded in glass. The displays with organic light-emitting diodes are much thinner (See Figure 1); also, they can consist of soft, bendable plastics. Technically, OLED Microdisplays have many advantages over LCD displays. They virtually have no viewing angle-dependency, and have the shortest switching times, especially at low temperatures. In addition, OLED Microdisplays are lighter and more powerful compared to LCD displays. M-OLED is a specific technology for micro-sized industrial displays; for example, when used as a viewfinder in cameras; or, as a camera display in wearables, or smart glasses; and, imaging sensor displays. (See Figure 2).

M-OLED technology has many advantages over LCD displays. OLED Microdisplays have a very fast response time and allow increased brightness, and have a much higher contrast ratio compared to LCD.

Response Time – M-OLED is an emission based display technology. After voltage is applied to the OLED Microdisplay, electrons start to migrate between the anode and the cathode (See Figure 3). Light emission starts immediately and the picture is output from the display. Essentially, liquid crystal based displays are a pipe in which light passes in one direction, only. When voltage is applied, the pipe rotates 90 degrees through which transmits light. The rotation of LC molecule takes milliseconds and creates the slower response time of LCDs (See Figure 2). Based on these mechanisms, OLED Microdisplays are extremely fast regarding response times. Light emission starts within a few microseconds, while the measured response time in Liquid Crystal Displays (LCD) is milliseconds. At low temperatures, the differences between LCD and M-OLED increase even further. At below zero temperatures (oC), LCD response time increases drastically, while OLED Microdisplays can maintain the same approximate response time. (See Figure 3) 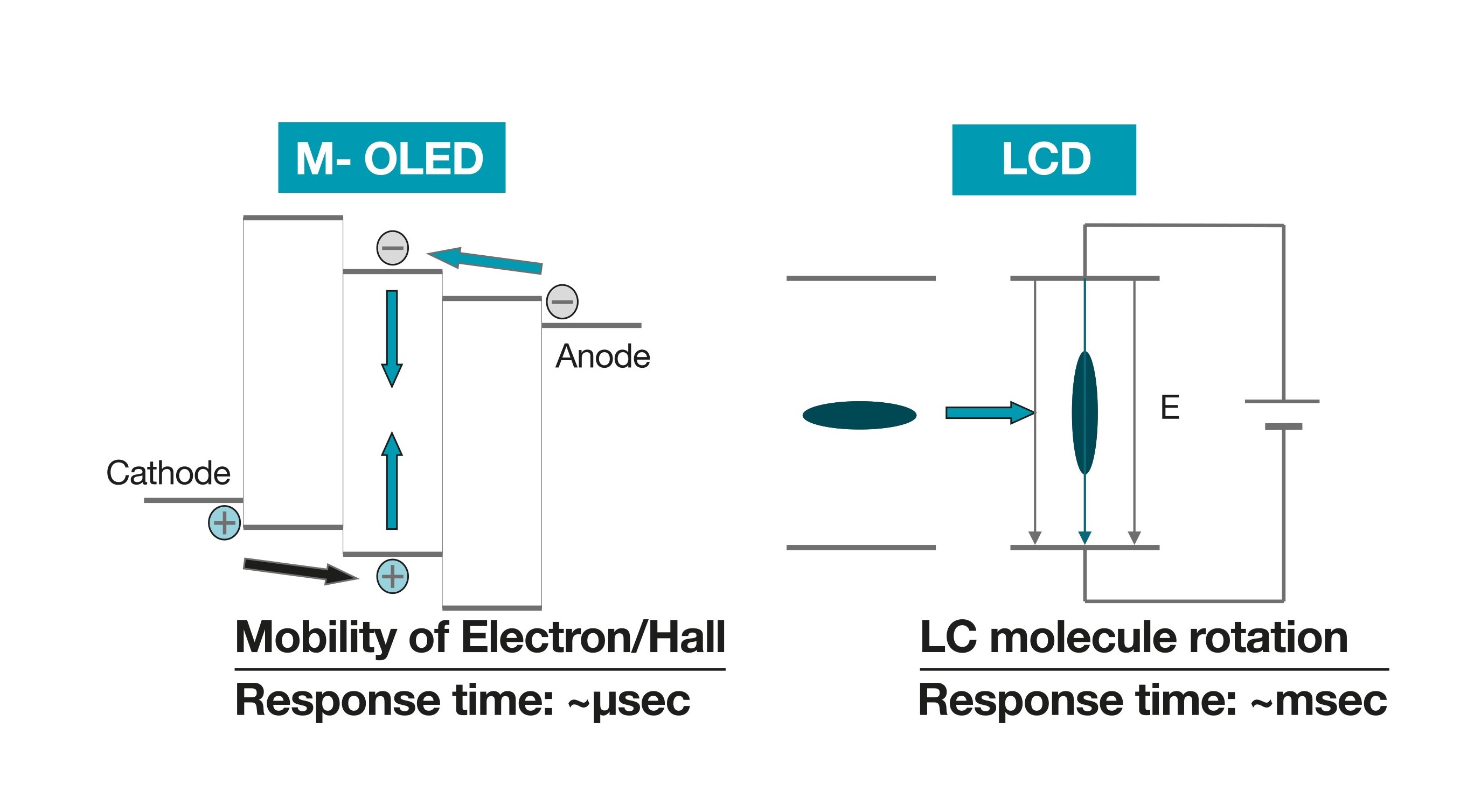 The average response time for reflective LCD technology is two milliseconds and this delay causes color break-up while transmissive LCDs have a 5-millisecond delay, and these attributes also cause image motion blur. M-OLED technology has a reaction time of less or equal to 0.01 milliseconds, which is respectively, 10 microseconds (see Figure 4).

Figure 4: The impact of response times on picture quality

Color Reproduction – Black levels in M-OLED technology appear as true black. The fact that each individual pixel is self-emitting, and for this reason there is no light leakage from active pixels in the same vicinity. There is light leakage in LCDs due to the “continuously active” backlight. An active backlight is not required in OLED Microdisplays, and the panel is completely black at resting state. This “true black” condition leads to higher contrast, better brightness, and a more colorful visual experience as illustrated in the sample pictures, below. (See Figure 5)

The color gamut of OLED Microdisplays function much differently compared to reflective or transmissive LCD screens. Reflective LCDs operate in “field sequential” mode; they produce a time delay during light emission. Transmissive LCD pixels have a color filter that separates the pixel into RGB components. Within the M-OLED color gamut, every white OLED is superimposed with one red, green, or blue color filter, and transmits all the emitted light in one instance. The color gamut of M-OLEDs sRGB reaches 113% for white, 100% for gray, and 90% for gray, while both LCD technologies only reaches 120/80/40 and 90/70/40. This pixel arrangement effectively increases the contrast ratio for OLED Microdisplays to over 100.000:1, compared to 150:1 and 300:1, respectively, for LCD displays. These measurement differences are not merely technical in nature; the enhanced color reproduction is visible directly, and makes a tremendous impact, especially at low luminance levels.

When compared to the required components comprising back light, polarizer, and the panel in reflective LCDs, and an additional polarizer for transmissive LCDs, M-OLED packages can be built much smaller and thinner than LCDs. They support system miniaturization in all ways, including less power consumption and heat. OEM manufacturers especially benefit from the increased flexibility of the OLED material in both production and durability.

M-OLED technology demonstrates specific advantages for integration into head-mounted displays and wearables for Augmented Reality (AR) applications.  The high contrast provided by OLED Microdisplays allows the additional information layer to appear seamlessly, and not as an overlay; this information is simply added to the background for a “real AR” experience (see Figure 6). M-OLED, with no color breakup, produces very high visibility of the additional layer with crisp, clear images, without blurring. The small package footprint allows wearables to be produced more compactly and lighter for increased usability and wearing convenience. 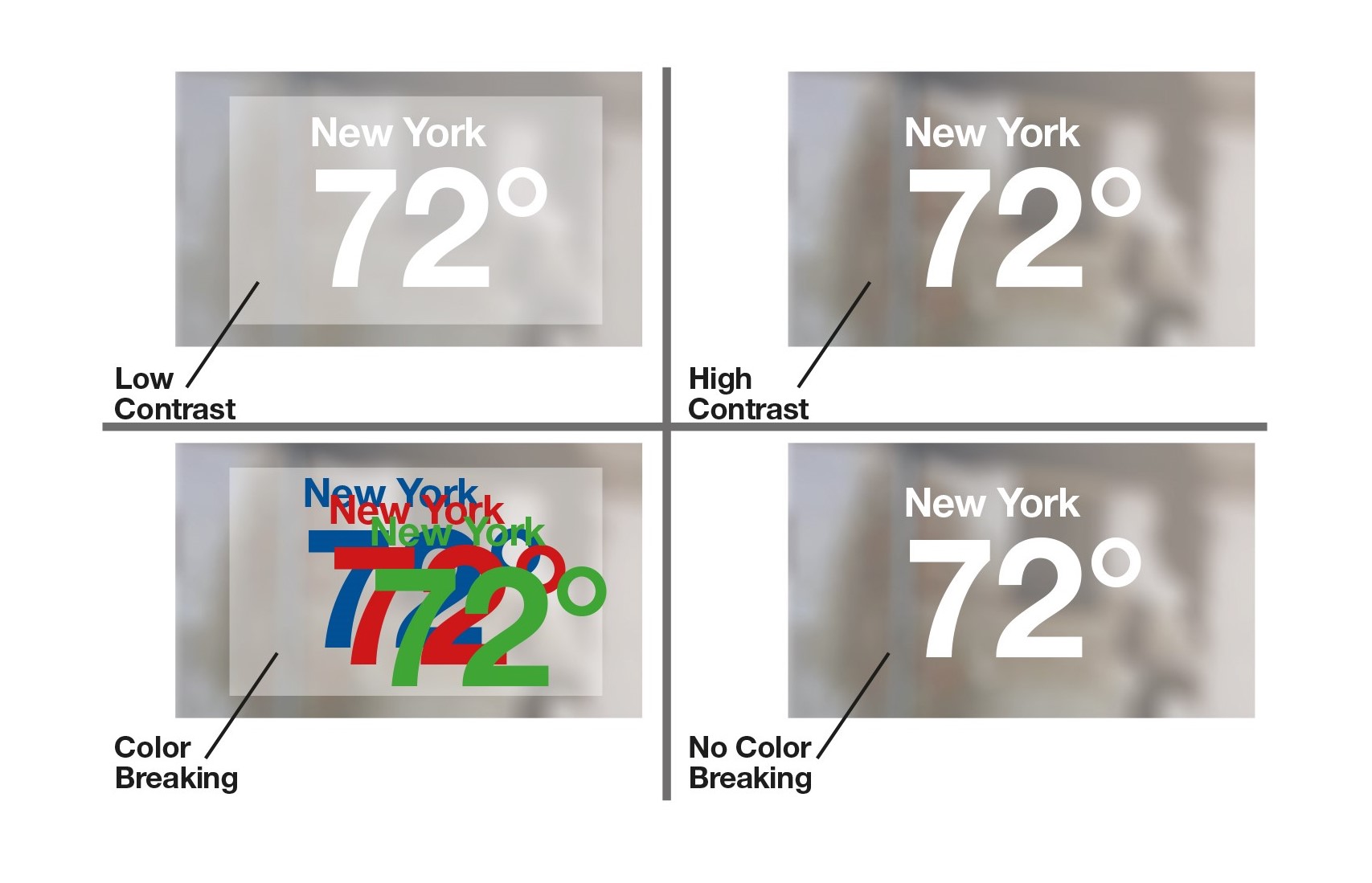 The four main demands of the AR industry, not only for wearables, provide a great summary for the advantages of M-OLED technology. These demands comprise:

With its inherent small packaging, effective and bright technology, M-OLED technology is suitable for many potential applications using micro-sized displays in both industrial and consumer electronics to provide a very high picture quality. In addition to AR head-mounted displays, Virtual Reality glasses bring a huge market potential and a need for imaging perfection to dive into new virtual worlds. High-precision binoculars and monocular devices benefit from OLED Microdisplays in addition to electronic view finders for consumer, broadcasting, and, Fundus cameras.

In fact, self-emitting OLED’s are more effective, flexible and easy to handle than classic LCD’s. With its significantly faster response time in the microseconds range, better color reproduction without the need of active back light, and higher color gamut values, they produce brighter, fully-saturated pictures with higher contrast. OLED Microdisplays’ support of miniaturization causes them to fit perfectly in small, thin devices to be portable and wearable, while still providing real-life experience without blurry artefacts in AR and VR applications.