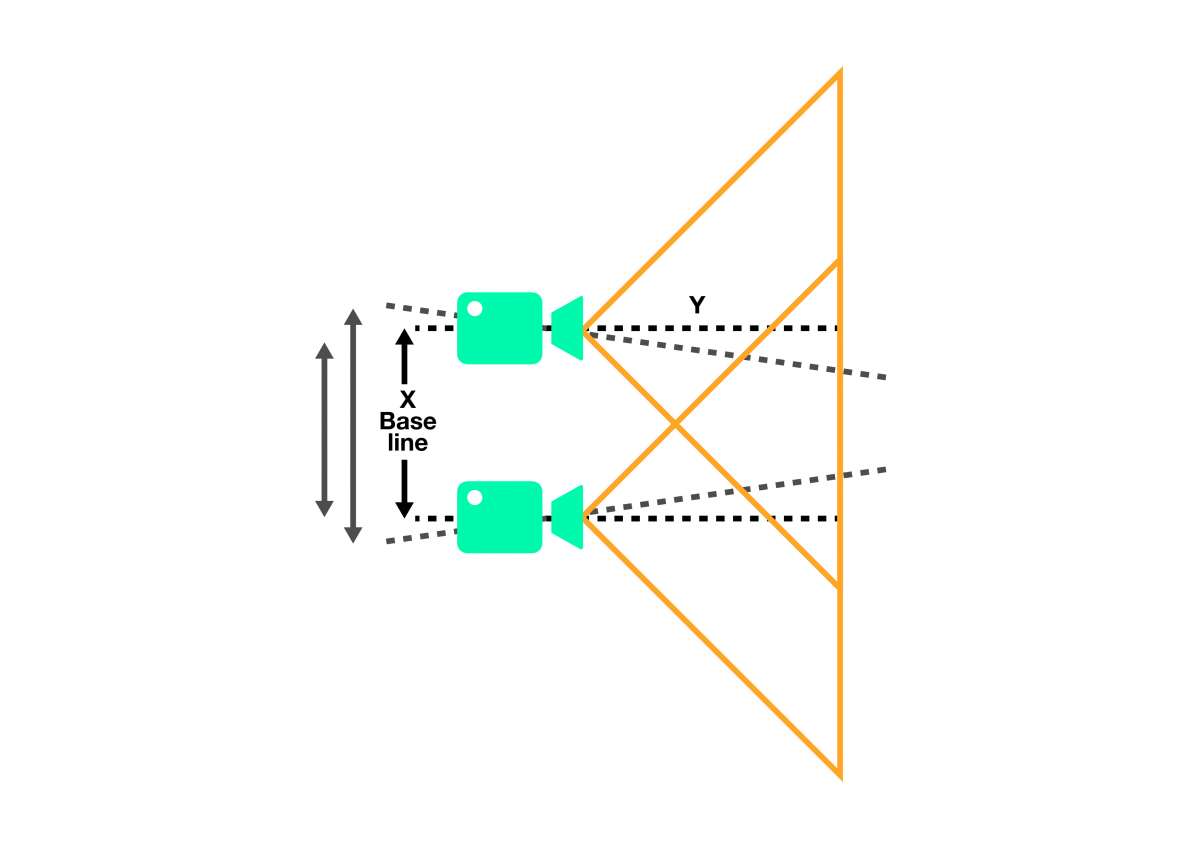 Stereo cameras perceive the world in a manner similar to humans; this similarity allows machines using stereo technology to perform and interact like human partners. Robots equipped with a stereo camera can grasp objects autonomously, without the need for additional sensors or lights. Autonomous cars can have the ability to detect a human crossing the street and accurately determine their distance from the moving car, and their walking speed. The selection of the correct lens for a stereo application is much more important than for a setup with a single camera. The position and perspective of each camera with respect to the other determines the system’s accuracy. Environmental parameters require consideration, in addition to temperature, shock, and vibration.

Stereo vision systems create a 3D reconstruction of the industrial environment from a pair of two-dimensional images from 2 different perspectives; usually, these perspectives are two separate sensors and lenses, or ‘stereo camera’. The selection criteria for these lenses requires additional consideration for stability and the system environment. Essentially, a stereo camera is a setup of two similar sensors and lenses separated by a distance x, referred to as the “baseline”. The field of view of the two lenses overlaps at a distance y in front of the stereo camera system, depending on the focal length of both lenses. Two images are acquired from both lenses; each with a slightly different perspective. After an image of a known scene has been acquired (for example, an image of a test chart for calibrating the system), the images of the two sensors can be used to calculate the depth information in the scene.

In most cases, a high precision calibration can be provided solely in-factory; it is necessary to implement high resolving test charts to perform this level of quality calibration. After the calibration is completed, the algorithm calculating the depth information assumes that the distance between the two cameras and their orientation to each other is constant. Figure 1: Stereo system: The baseline distance between the two sensors, and the alignment are fixed

If one of these parameters varies, it is likely that the calculation of the depth map will be inaccurate, or potentially lead to a more serious error. Therefore, the setup and alignment of the two “cameras”, e.g. sensor and lens, need to be stable against any environmental influence. The most common variables are expansion and contraction of the camera system due to temperature changes, shock, and vibration.

One or more parameters can be more critical, depending on the system scenario. A stereo system with a larger baseline distance, for example, is more sensitive to temperature changes, due to the increased expansion of the larger mass. Conversely, vibration is more of an issue with smaller systems that might be mounted on robots.

Lens manufacturers provide different design and material solutions to meet these needs with their lenses. The stable setup of the lens mount and sensors rests with the camera manufacturer. Nevertheless, an evaluation of system requirements and the precise matching of all components is necessary to guarantee an optimal result.

Lens parameters, and especially the mechanical design of the lens, need to be adapted for stereo vision applications. Usually, C-mount lenses have moving parts, including a variable aperture and a focusing unit. The more sophisticated high-resolution lenses utilize a full floating design. Normally, the focus and aperture can be set by locking screws. However, depending on the design of the lens, “locked” parts can “shift” in environments with sufficient shock and vibration. Under these circumstances, a lens can lose focus, or have the aperture affected. Even if the fixing screws prevent defocusing or a major change in aperture, stereo systems are more sensitive to small changes that are not considered an issue with single camera solutions. Just as the lens elements can be moved for adjustment, they cannot be completely fixed to the housing that is still subject to subtle movements. Also, stability depends on the number of screws and the screw types; for example, pan-head screws are more stable than knurled screws due to the increased locking force that can be applied to them. Lens manufacturers have different solutions to overcome the issue of lens shift.

One solution is the insertion of a spring between the lens and the locking screw; this method applies force on the lens elements to keep them in their correct position. This elegant solution allows the focus to be adjusted and the spring absorbs the shock; whereas a more rigid system tends to break. Nominally, these lenses deliver a shock-resistant performance, with the optical axis displacement of no more than 10µm* at an orthogonal acceleration of 10G. In M12 mount designs, for example, a rubber ring can be used instead of a spring, achieving similar results. Figure 3: A spring guides the lens elements in the correct position

Another solution is “ruggedized” lenses; here, the single lens elements are glued to the lens body, and the entire lens set is moved for focus adjustment with a lockable jam nut. The nut tightly locks the focus in place so that these lenses can withstand vibrations up to 10G, and 70G of shock. The iris is produced as a fixed iris plate instead of moving blades. Usually, different F-stops are available, but then there is less variety with a fixed iris, than with a variable aperture.

Most of the C-mount machine vision lenses are made of glass elements and metal bodies. Therefore, changes in temperature are a minor problem as glass and metal have relatively small coefficients of expansion (¡). Consequently, imaging performance is constant over a wide temperature range.

In contrast, M12, M8, or board mount lenses are more likely to be made, in part, from plastic. Plastic lens elements can change their shape over variations in temperature and this property changes the optical performance. A plastic barrel can expand or shrink over temperature changes. This variation slightly defocuses the image, or allows the lens elements to tilt in the barrel. The selection of a suitable material for the lens mount, or lens elements that compensate for this expansion are possible solutions to overcome this problem.

Board mounted lenses come off the shelf with a fixed aperture, and have the advantage of no moving parts. A focus adjustment is achieved by screwing the lens in and out of the mount. The adhesion of a glass and metal lens to a metal mount provides a simple and stable lens setup.

M12 mount lenses are small and light (even if made of fully formed glass) as compared to C-mount lenses, and the effect of shock and vibration is significantly reduced. A precise production process is necessary to avoid loose or tilted lenses. The part-to-part accuracy of the fundamental optical parameters like focal length and aperture need to be tightly controlled; even slightly different focal lengths lead to inaccurate 3D measurements.

A common method with which to avoid loose lens elements is to glue them to the barrel. This production method solves the problem of loose and moving lens elements under shock and vibration, or simple movement. Just the same, it can introduce problems under wide temperature ranges, or for the long-term stability of the system; it is not a perfect solution. The thermal expansion coefficient of the glue cannot be ignored, and neither can its aging performance be ignored under the heat cycling that it will endure over the years of installation.

Aside from all design theory, lenses must be tested to meet specifications during the prototyping phase. C-mount lens manufacturers test their lenses and either share the information automatically, or on request. In many cases, board mount lens manufactures possibly test their lenses for shock and vibration. Usually, this type of testing is performed at the request of the customer and their customers’ specifications. Historically, a primary estimate of the lens stress performance (shock and vibration) can be supplied based on the design parameters and design experience.

Generally, a test of the complete stereo vision system is advisable, especially if shock, vibration, or temperature changes are expected in the field. Previously, it has been mentioned that there can be interactions between the different components in a system, like lenses and mount materials. The vibrations that a lens experiences in a camera system are very different from that experienced in testing the lens alone. A complete camera system is much heavier than an M12 mount lens, for example, and exhibits widely different vibrational and shock behavior. Additionally, the camera housing can amplify or attenuate the shock and vibrations introduced into the system.

There is a wide variety of stereo vision systems, and no one rule applies to all of them. Here are some key factor to consider: