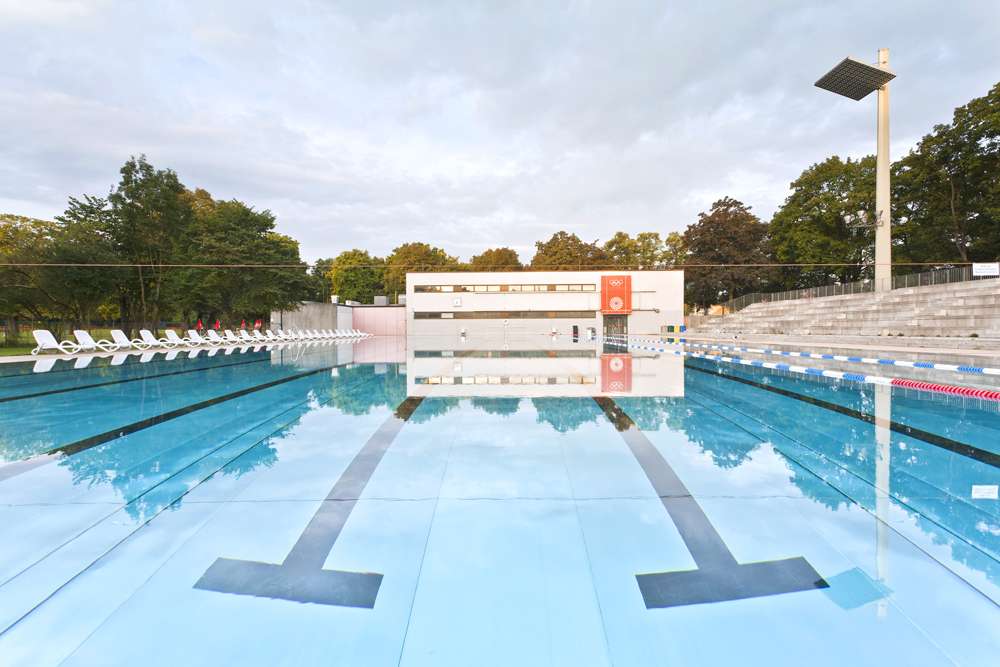 The image “Dantebad 01” from your POOLS series shows the open air pool in the district of Gern in complete peace and quiet.

I remember the day when I took the shot very well. It was in the summer of 2012, early in the morning before the official opening. The weather was warm and overcast, with no wind – a wonderful combination.

Your POOLS series consists only of images of deserted swimming pools. Did you have to climb over fences to take the pictures?

That’s how I took the first photograph in the POOLS series. In 2006, I was travelling through Switzerland with a fellow student and in the middle of nowhere we found an open air pool that hadn’t yet opened. We climbed over the fence and took a couple of photos. That was the start of the POOLS series. Most of the remaining pictures were taken with the permission of “Stadtwerke München”, the authority that operates most of the pools. It took a long time and I had to knock on a lot of doors before I got their approval. Now I’m working with other pool companies as well so that I can always access the pools in the early morning. For me to be able to take the perfect picture, everything has to be clean and dry, with no swimmers in the pool and, most importantly, water as smooth as glass. In the case of indoor pools it’s easy to plan, but with open air pools, there only needs to be a slight breeze and ripples will start to form on the water.

What do you want to say with the POOLS series?

Because I studied graphic design and photography, I generally think in terms of grids and surfaces. Swimming pools are particularly appealing in that respect. They almost always have a graphical character. With tiles, start blocks and lanes, everything is very strictly organised. The “Dantebad” was built for the 1972 Olympics and an official event of that kind requires precise organisation. This is clearly reflected in the architecture.

Images from the series POOLS

The special feature of the series is the huge divide between the images themselves and the purpose of the pools. When most people think of public swimming pools, they generally imagine screaming children, people coughing because they’ve swallowed water and announcements over the PA system by the pool attendants. In contrast, my pictures show peaceful, almost meditative places. There is no indication of the noisy crowds of people who fill the pool at other times.

Structures, boundaries, new perspectives and, above all, a sense of solitude characterise all your work. What inspires you?

It’s the idea of grids again. I divide up the images into visual units. There are several reasons for the feeling of solitude that they convey. I usually present places that are not being used for their normal purpose. Empty cinemas and underground stations, deserted swimming pools or football stadiums – these are all designed to accommodate huge crowds. My works show what happens when no one is there. This leads to a difference between what the observer expects and what he or she ultimately sees. One of my oldest series of works, which I’m particularly fond of, is TUNNELS. They were built purely for functional purposes, with the assumption that they would never play an aesthetic role. But I see these structures as wonderful objects, rather like architectural sculptures. I like to explain my inspiration in terms of a statement made by Jules Verne: In my work I try to create visual equations that can always be solved.

Images from the series TUNNELS

Robert Götzfried was born in Lindau (at Lake Constance). He attended a printing college and is trained as a typesetter in Constance. Later he studied communication design, specialising in print design and photography. Now he lives in Munich and works as a photographer and designer. Robert Götzfried lectures in photography at the Schule für Gestaltung (College of Design) in Ravensburg.
www.robert-goetzfried.com